From Itapira to the World

With over 300 registrations abroad, Cristália exports drugs and technology to more than 30 countries in Latin America, Africa, and Middle East. The company is a benchmark in Active Pharmaceutical Inputs (APIs) exports, and is globally recognized for its anesthetics line.

Among the 300 drugs that have been registered abroad, 80% are Cristália-owned products, and the remaining 20% are held by partners.

In 2017, the company was granted with a patent for API animal-free collagenase in the United States, representing the first step in registering that API and the Kollagenase ointment line, paving the country’s way to exports. This was the 16th patent granted to Cristália in the U.S.

Another example of a drug fully developed by Cristália, which is being now marketed in other countries, is Helleva (lodenafil carbonate). Fully developed in Brazil from molecule conception to the finished product, Helleva is exported to Mexico, the second biggest pharmaceutical market in Latin America.

Cristália’s portfolio of anesthetics and pain killers has also become a global benchmark. Key exported products include: the anesthetics Sevocris; Fentanest; Propovan; the sedative Dormire; the muscle relaxant Dantrolen, which is used to treat Malignant Hyperthermia, and; Ketamin +, a racemic mixture separation of ketamine.

As an evidence of the quality of its anesthetics line, in November 2017, Cristália was recognized by the United States Pharmacopeia (USP) for delivering the standard of the substance Ropivacaine Hydrochloride.

Pharmacopeias market standards so that companies can have a reliable base to use as a reference when conducting chemical analyses in the development of analytical methodologies and in quality control.

The active substance Ropivacaine Hydrochloride is included in the drug branded as Ropi, a local anesthetic, and is supplied as standard to USP since 2004 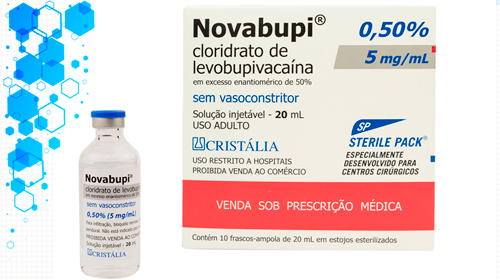 Another example of Cristália’s expertise in technology are the Sterile Pack packages and Unitarized Doses, which are also exported, further enhancing product use safety and taking solutions developed and recognized in Brazilian market to the world.